hey dave...I dont ride over there...but when the question first came out Gerald andothers were looking for ways to get this guy off the road...so I sent it to my sister who is a deputy sheriffin monterey and she sent me back some suggestions I forwarded along...Marc

This is one of the reasons I like riding with a group.>> Btw, how often, what days & times do you guys do this Calaveras Road > ride?> And where do you guys meet for this ride? Let me know.>> -Dave Schwartz>>

Gerald....glad this seems to be working out and you are making> >progress... guess my sister the sheriff was> >right...document/ file/document/ file> >until they get tired of you and act!> >> >Marc R

Gerald Sylvester wrote:> > Hi All -> > Another update. I spoke to the Officer Heylen again. The> > driver that almost hit at least 10 of us in separate incidents all on> > Calavaras Rd. got into an accident in mid-July and had his car> > impounded. It turns out he was driving with a suspended license. On> > Wednesday I'm going to the Santa Clara Courts to pull up the driving> > history on this guy (I have his name) and get the docket number for> > his arraignment on September 2nd. The DA's office told me submit a> > letter to the DA as well as to the court record. Please start typing> > up your letters. I'll fill in the details when I get them on> > wednesday. One person filed a police report against the guy a couple> > of years ago. Please get the police report number. The more info the> > better. I'd like to get these sent in sooner rather than later so the> > DA has time to prepare. Right now I doubt the DA knows anything about> > our incidents. The DA's office said normally the DA won't attend the> > arraignment but if the DA gets a lot of letters then they will send> > someone.> > Lastly, the guy also has a black honda sedan (sorry, don't> > have the license plate number with me). I'm guessing it is about 8-10> > years old. Watch out for it on Calavaras Rd. and if it is the guy> > with the description below, call the Milpitas police.> >> > Gerald Sylvester

Hi All -> > I spoke to Officer Haylen (sp?) of the Milpitas Police> > Department. I asked him the status of the series of complaints against> > this one driver. Officer Heylen then told me the truc k was involved> > in an accident just yesterday, the truck was towed away and> > impounded. I wonder what the circumstances are. How can you find> > this out? I didn't see anything online in the SJ Mercury News about> > an accident but I'll keep my eyes out. Thanks to the *half dozen*> > people who made calls to the police about this guy.> >> > G.S.

The new Look Keo cleats with rubber grippers typically sell in the high twenty dollar range. There is a 3rd party manufacturer (Exustar) that makes Look Keo compatible anti-slip cleats for $14.98 on ebay. I've not tried these but look to be very much worth the try considering the savings: 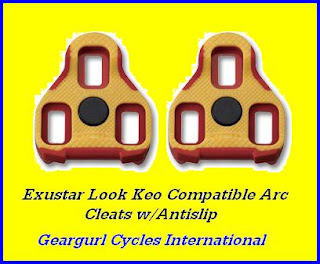 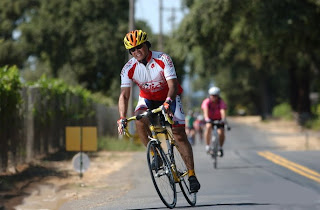 This is wrong, another Photo Crazy solo shot, specially in agony. 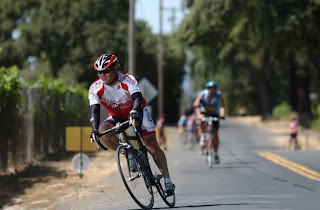 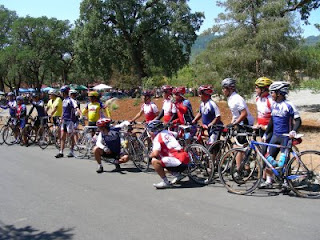 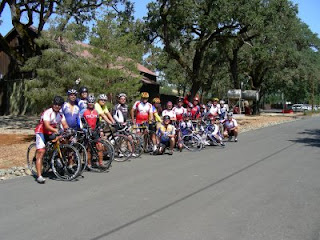 A nice warm-up for the Napa Century riders.
Please post up if you are coming to this ride. 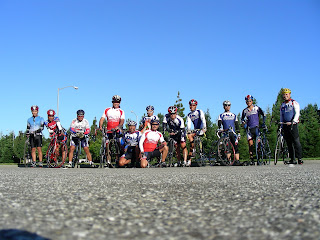 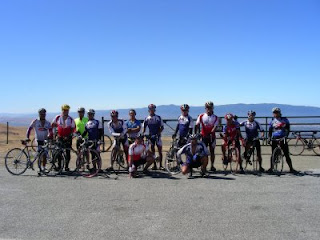 WASHINGTON D.C. (BRAIN)—The U.S. Consumer Product Safety Commission, in cooperation with Look Cycle USA, have issued a voluntary recall of about 40,000 pairs of Keo pedals.The steel axle inside the pedal can break, posing a fall hazard to cyclists.Look Cycle has received 14 reports of incidents with broken pedals, including seven injuries which resulted in scrapes, cuts, contusions, elbow pain and a knee injury.The recalled pedals are black and were sold separately from bicycles. Pedal models include the Keo Classic, Keo Sprint, Keo HM and Keo Carbon. The model name is printed in white on the side of the pedal. Date codes between January 2004 and December 2005 are included in this recall. The date code for the Keo Classic, Sprint and Carbon pedals is on a dial stamped onto the pedal. The date code for the Keo HM is on the bottom of the pedal, with the letters A through L corresponding to the month, and the numbers 4 and 5 indicating 2004 or 2005.These pedals were sold at specialty bicycle retailers nationwide from January 2004 through July 2007 for between $100 and $500.The pedals were manufactured in France.Consumers should immediately stop using the recalled pedals and return them to the place of purchase, or contact Look Cycle USA to arrange for shipping and
Posted by johnV at 10:56 PM 3 comments:

Does anyone have the bike route details from Breakwater Ave., Hayward (adjacent to Hwy 92) to San Leandro Marina? I was told that there is an off-road bike path along the bay to Marina. I searched on sites such as bikely.com etc., but did not succeed. Thanks.
Posted by Cesar at 9:43 PM 7 comments: