We are sorry for the last minute cancellation of our 2008 Christmas party. We did not realized that there were members who have plans to attend. We were forced to cancel the party due to members non response to our x'mas posting. Only very few members (3) reply in our comment section of their intentions to come. We can not rent the venue and proceed with our plans if members will not show their support. To avoid this situation from happening again, We request our members to please reply in our comment section as soon as possible. This way we can avoid guessing who's in & who's not in any of our projects, gatherings or even in our regular weekend rides. Do not forget you can also use your cellphone text messaging to show your support or let us know if you are coming for a ride. There is always a way, If there is a will.

We also feel bad that we have to cancel the party, that is why we decided to have a small get together this weekend for everyone. Again our apology.
You can check link of: Our Cash on Hand Pondo after 1st Siclista Classic and Tropa party donation.
Posted by Rodge at 4:51 AM 1 comment:

The Saturday Ride up Palomares-5 Canyons ended up nicely with a surprise call from JohnV. After being punished on my cyclocross by JohnM and LarryB, we headed over to JV's residence and had the honor of celebrating JohnV's son's return from active duty, and his grandson (yes, grandson's Christening). We were first in line (as the official celebration starts 3pm, we were there noon). The food was great - menudo, pansit, hito, papaetan:), filipino spaghetti and another exotic dish prepared by JohnV's father-in-law, if you could kindly fill us in on the exact name, JohnM:-). It was a nice, unannounced and very hospitable post-ride lunch from a generous Siclista, JohnV - Thanks! 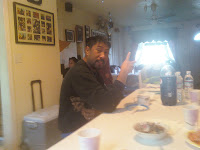 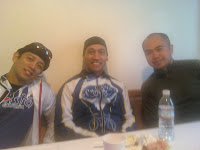 When somebody greets you Happy Holidays,
ask them what holiday they are greeting you for.
or politely reply with HUH?

Let us not forget what this holidays are really for.

MERRY CHRISTMAS and a HAPPY NEW YEAR to all. 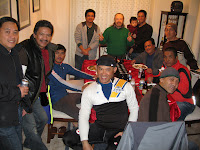 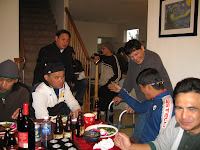 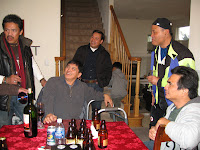 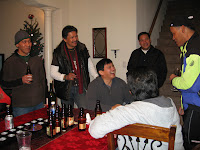 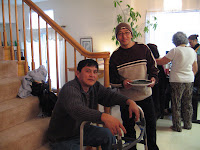 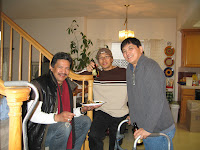 Ride Lunch will be at 2275 Marina Blvd San Leandro CA 94577
Rain cancel ride but not the lunch.

It was nice at first, since El pres signed that contract of no rain. 4 drenched and weary siclistas trekked the Oakland and Castro hills at 35F wind chill.Initially, the ride was doing well with minor ring around the rosy effect tracking down the route.Calling the GPS Capitan from base was always a must since we are often off our tracks ending at a golf course off golf link rd. As soon as we hit Grass Valley rd towards Skyline and Redwood road, the fat lady sings the blues. El Pres felt the drizzling and soon the rain was pouring in. Benjie was the most thinly clad and was really showing signs of not making it. Larry decided for a pit stop for coffee off Redwood road pass Seven hills and decided to call SOS. El Capitan ring up JACK and decided to volunteer for the RESCUE OPS. while warming up with a cup of hot welcome brewed KAPI with all 4's sipping up the last drop of caffein ,we decided to go farther up A street to Cycle Path where JACK the rescuer with his Saint Bernard,he,he complete with warm blanket for Benjie and an add on bike rack. It was a welcome sight.Back at base, EL Capitan and family serve as with much " Lutong Tagalog" menu complete with Dahon saging. Chef Roger's Puchero was delicious and authentic. My palate was indeed salivating.For the 4 of us, it was another siclista page book to tell around the camp fire. Like an old log book, it can always be corrected. EL Pres, next time if you sign the contract, don't let it expire. We can forecast the weather, but we can't predict it. ALL's well that ends well.

Here here to Roger's puchero..haven't had my taste buds dance boogie in a long time, tsalap! Hahaa, always nice to pick on someone for the 'unforseen cirmcustances' but the weather ain't the master of no one, not el pres or el capitan...john_m and i were both knotted at our foreheads thinkin' of u guys, even as we feasted on the best filipino meal we've had for a while...so glad you're all safe. In this winter time, the seasoned riders know it well: bundle up, vest up like you're gonna get wet, even if it starts up like a summer day,

for there are many misplaced
summers in wintry december,

and april showers do come in may
as they do in november :-)

Jack saves the day! Thanks for picking up 4 cold and wet Siclistas. Rodge, thanks for the great food. Next time, you lead the ride :-)

My wife read your comments. She said she cooked the puchero so she deserved the credits ;)

View Larger Map
Direction: From 880 exit Marina Blvd West to San Leandro Marina Park The house is after Doolittle Drive (2275 inside Villa Marina on the right side)

The route for the 2009 AToC is out. Let's plan for the San Jose to Modesto stage, Feb 17 noon downtown SJ.

Fans of the Amgen Tour of California may recognize part of Stage 3 from the 2008 race when the cyclists traveled from Modesto to San Jose; however, in 2009, the racers will be traveling the route in reverse with several changes. Beginning with a climb that is synonymous with cycling and the Amgen Tour of California, the cyclists will head up Sierra Road (1,930 ft.) within the first five miles of the stage. This epic climb will be a defining moment in the race and will create an action-packed day of racing for the cyclists and the fans alike. After completing the Sierra Road climb, the riders will face fast and flat roads full of twists and turns (Calaveras Road alone has more than 40 switchbacks) before climbing Patterson Pass. The stage will finish with two circuits in downtown Modesto.
Posted by Jack Ibagbaga (also known as) Batillog at 9:44 AM 2 comments: